#AIDSISNOTDEAD, the 16th edition of the awareness campaign of the use of condom by ContestaRockHair for LILA – Lega Italiana per la lotta contro l’AIDS  – this year – in collaboration with RUFA -Rome University of Fine Arts. Join us on December 1st at Pastificio Cerere.

December 1st is WORLD AIDS DAY, created in 1987 by UNAIDS, the United Nations Programme that every year produces and publishes an in-depth snapshot of the reality of the spread of the HIV virus on a global scale.Also in Italy the new diagnoses show a decrease. In 2018, for the first time, under 3000 were dropped: 2,847 reports, equal to 4.7 new cases per 100,000 residents (data from the AIDS Operations Centre). These are important advances but too slow if we really want to reach the goal of defeating AIDS by 2030, as prescribed by the UN. The youth groups (25-29 years old) remain, moreover, the most affected, with a less evident decrease in diagnosis and, even, an upward trend, from 2015, in the age group between 15 and 24 years old. Continuing to focus on prevention is, therefore, essential to really reverse the trend.

In this scenario ContestaRockHair and RUFA – Rome University of Fine Arts join forces to launch “AIDS IS NOT DEAD”: the annual campaign to raise awareness of the use of condoms that the international brand of hairstyle has been promoting since 2003 in collaboration with LILA – Lega Italiana per la lotta contro l’AIDS, a reality active for over thirty years in the field of prevention.

Now in its 16th edition, this year’s campaign finds in RUFA an exceptional partner, the Academy of Fine Arts legally recognized by MIUR that offers training in the field of art, design and communication. An unprecedented synergy that has generated the involvement of over 100 young who have given form and substance to the production of a photographic campaign aimed at spreading a message as simple as it is important: the invitation to prevention through the use of condoms as an effective means against HIV and sexually transmitted infections. “The AIDS IS NOT DEAD campaign is important because it reaffirms how much protecting sex and love makes you free,” says LILA President Massimo Oldrini, stressing the importance of using condoms as “a gesture that in its simplicity can and must be part of the intimacy of everyone, especially the youngest”.

Conceived by Alessandro Santopaolo and Massimo Bianco, artistic directors of ContestaRockHair, the campaign was carried out by the young hairstylists of the group together with the students of the third year of RUFA School of Photography, with the collaboration of Simone Belli Make Up Academy and Yellow Square. “AIDS IS NOT DEAD” is an invitation to prevention and participation, launched by young people and aimed at young people, which for the World AIDS Day will be extended to anyone who wants to lend their face. 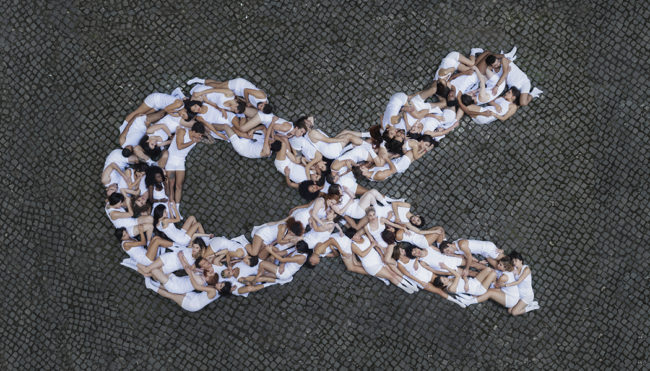 Join us on Sunday 1st December in Rome, at RUFA Pastificio Cerere – via degli Ausoni 7. From 5.30 pm to 11 pm will take place a special happening where  you can join the photo call “Mettici La Faccia”. All the portraits produced will be published on social networks, accompanied by the hashtag #AIDSISNOTDEAD, with the intention of spreading the invitation to prevention on the web.The event will start by the speech of the President of LILA and will be animated with live performances by Flowing Chords, Jammit ft. Tahnee Rodriguez & ILovePizza and dj sets by Ricardo Baez (Tropical Animals), Pablo Lértora (Yellow Bar) and Andrea (Tonika), and Zia Rosetta cooking show. During the evening there will be a fundraiser in favour of LILA.